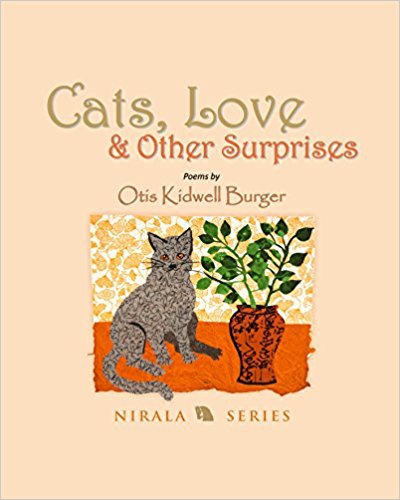 Cats, Love & Other Surprises is an astonishing book of poems by 93-year old Otis Kidwell Burger, of New York City. Both a poet and a sculptor, Otis delights in the company of her cats in verse both whimsical and lyrical. Other poems reflect on a long life divided between New York City and a country cabin in the New England woods; these explore family memories, the vagaries of love, and the natural world, to which she is connected by both scientific curiosity (she was a zoology major at Cornell College) and philosophical questioning. The poems traverse territories from the quotidian to the metaphysical; from rejoicing in the return of a lost cat “sitting on my lap purring/and stitching us together again/with her tiny, needle-sharp claws” to imagining a prehistoric woman artist sitting on the floor of her cave, “whittling a bit of mammoth bone. /I don’t know yet if it will be/A horse or a bison. Prey. Food. Perhaps a charm for the hunter./Or perhaps a cave bear, immense, terrible./Death itself, but made small and manageable. A protection.” Solemn, yet also witty and accessible, these are American poems of great strength and a quirky animistic sensibility. They are also poignant. Musing on her unmatched “bachelor” socks, the poet imagines their lost, significant others and why they stepped out, never to return. In another poem, she mourns that “the darkness falls/And tucks us in our homes/No more telephones/No more visiting/No more conversations/No more sleepwalking, or I/Would be five miles away soon/And in bed with you.” Delightfully illustrated by her own daughter, Katherine Burger, this is a majestic little gift from a marvellous mother/daughter team. 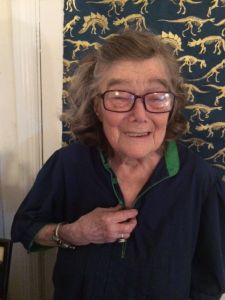 American writer and artist Otis Kidwell Burger was born in 1923 in Staten Island, NY, and has lived in Greenwich Village since 1932. She graduated from Cornell University and married Knox Breckenridge Burger in 1946; they had two daughters, Neall and Katherine.

Her published work includes: An Interesting Condition, a novel; The String That Went Up, a children’s book; poetry in The New Yorker, Good Housekeeping, and Gourmet Magazine; science fiction in Galaxy and Astounding magazines. She’s written book reviews for The New York Times, Book of the Month Club; The Village Voice, and Kirkus Services, as well as articles in the Villager. All of the poems included in the book, except The Stag, were written in the last two years

Katherine Burger, Otis’ second daughter, is a playwright and artist. She and her husband Randy live in the Hudson Valley.

Word Has It, by American poet, Ruth Danon takes on the unease that has accompanied the troubling politics that have created so much disturbance in the last few years. The book launches the reader into a journey marked by foreboding and innuendo. In the first section the speaker proceeds on an uneasy path while a character named “Word,” referring to herself in the third person, offers acerbic commentary along the way. In the second section the speaker retreats first into the domestic, then to a deeper interiority in which a journey through the rooms of a house embodies a study of various states of consciousness that lead her to the recognition of her role as a poet. By the end of the second section the speaker in ready to leave the interior space and venture into the third section, where she takes on the daunting poetic task of augury. The foreboding of the first section culminates in the violence that has been hinted at all along.

Ruth Danon gives us one of her most darkly oracular works. . . . .” The poems are acid,ingenious, and unsentimental.
–Andrew Levy, editor, Resist Much, Obey Little

. . . Deep and skeptical, natural and magical, melancholic and beautiful, Danon’s oracle makes a truly compelling statement – one to be heeded, one to be savored.                   – Stephen  Massimilla,, author, The Plague Doctor in His Hull Shaped Hat and Cooking with the Muse